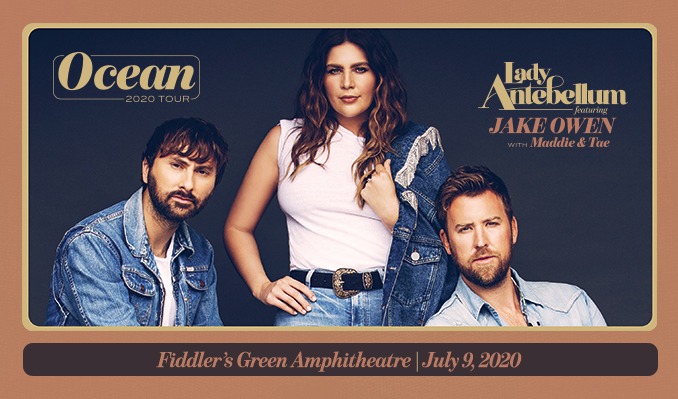 Planes, trains and automobiles. Lady Antebellum has spent plenty of time in all three. Driven by the need to continually evolve, the country trio always seems to be in transit, pushing toward a newer, bolder sound one minute and hitting the road for a worldwide tour the next. Sometimes, those two things happen at once.

With 747, Lady Antebellum’s fifth album, the band captures the speed and spirit of its critically-acclaimed live show in 11 new songs. Bandmates Charles Kelley, Hillary Scott and Dave Haywood may have formed the group in Nashville, with all three singers harmonizing for the first time around Haywood’s piano, but they earned their stripes on the road. That’s where Lady Antebellum truly came alive, mixing the rootsy stomp of forward-thinking Country music with the swooning, sweeping sound of three voices that were born to mesh.

As the shows got bigger, so did the band’s ambition. Written during the 2014 Take Me Downtown Tour, 747 — whose title rustles up the image of a fast-moving plane bound for bigger, better places — doubles as a metaphor for the group itself. After spending years at the top of the Country charts, Lady Antebellum is ready to pull up the wheels and climb even higher.

“We started discovering more of an ‘in your face’ sound that we’d never explored before, so we began writing towards that mentality,” says Kelley, who remembers walking into a dance bar after a Lady Antebellum concert and feeling the need to compose faster, fiercer songs that could live in that environment.

The first step toward making that transformation was relying less on the band’s history with mid-tempo ballads — although two softer songs, “One Great Mystery” and the nostalgic, nocturnal “Damn You Seventeen,” did make the final tracklist for 747 — and focusing on more explosive material. Kelley, Scott and Haywood invited some of their favorite songwriters to join them on the road, too, resulting in a series of late-night writing sessions on the band’s tour bus, with everyone traveling together from one sold-out show to the next.

“Being on the road and writing new songs, we found ourselves wanting more of that high energy material,” Haywood remembers. “We came up with songs like ‘Bartender’ and ‘Long Stretch of Love,’ with that big feeling that really hits you hard in an arena.”

During gaps in the band’s busy touring schedule, Lady Antebellum returned to Nashville and recorded the new songs with Grammy-winning producer Nathan Chapman. It was one of the group’s first times working with anyone besides Paul Worley, who’d played a monumental role in Lady Antebellum’s career by co-producing multi-platinum hits like “Need You Now,” “Just a Kiss” and “I Run to You.” The band became a chart-topping, Grammy-winning juggernaut under Worley’s wing… but even the biggest groups need to reach outside their comfort zone.

“It’s different when you walk into a different studio and talk to a different producer,” Kelley says of the band’s transition. “Something different comes out, naturally. One thing with Nathan is he works really fast, and he works all hours.”

As a result, Lady Antebellum finished an entire record in a short, inspired period of time. Chapman pushed the three singers to deliver their best performances up front, often recording a song’s vocal tracks in just four or five takes. He also stretched the boundaries of Lady A’s sound by introducing some subtle digital touches, like loops and computer programming. When the group considered scrapping one song, “Sounded Good at the Time,” after falling out of love with its opening guitar riff, Chapman broke the riff into smaller segments and reversed them, creating a new hook that pushed the song forward without abandoning its organic roots.

“Bartender,” 747’s first single, is another game-changer. Driven forward by banjo, percussion and an insatiable chorus, the song finds Scott thinking back to her days as a single woman, when a double shot of whiskey could wash away the memory of a no-good ex.

“I thought it was such a great curveball to put out first,” she says. “I’m a mom, and I love that role more than anything, but I’m also a woman who lived a lot before she was a mom. ‘Bartender’ has allowed me to get outside of my new role, and it’s so fun to perform. To watch how well it’s done in such a short amount of time, it’s just continued proof that our fans want fun from us.”

“It’s just a good, fun song,” added Kelley. “We have to remember, as a band, that not all our singles have to be these ‘big statement’ songs like ‘Hello World’ or ‘Need You Now.’ Sometimes, they can just be about looking for a good time. ‘Bartender’ and ‘Downtown’ kind of prove that to us, that we’ve gotta let our hair down a little bit on these records. Then, when you do hear a song on this record like ‘Lie With Me’ or ‘One Great Mystery,’ hopefully it will mean a lot more.”

Scott has high hopes for “Lie With Me,” a stirring duet written by Marc Beeson and Abe Stoklasa. She trades verses with Kelley during the song, which spins the tale of two estranged lovers who agree to spend one final night together, even though they know the flame has died out..

“One of our favorite songs in the entire world is ‘I Can’t Make You Love Me’ by Bonnie Raitt,” she says. “It’s a perfect song that is incomparable. It puts you in this place and exudes this mood. I just listen to that song and I close my eyes and I see a movie in my head. [“Lie With Me”] did the same thing for me, in a different way. You’re listening to the lyrics and you can close your eyes and just see this whole scene play out.”

It’s appropriate that 747 — an album about love, nostalgia, and the things that move us emotionally and physically — also contains several fast-paced anthems about transit. The first is “Long Stretch of Love,” an epic track that owes as much to rock ‘n’ roll’s raw swagger as Country’s rootsy twang. The last is “747,” a soaring title track built around the singers’ three-part harmonies. “This 747 can’t go fast enough,” goes the latter tune’s refrain, and while those lyrics technically refer to a heartsick man who’s flying back home to see his wife, they also paint the picture of a band that’s already skyrocketed to creative heights… but can’t help pushing down the throttle for a bit more speed.

“We put so much energy into every single vocal performance and every aspect of recording,” Scott says of the album, which arrives less a year after the deluxe release of Golden, “and that’s what we want people to hear. That electricity. The electricity of new relationships, of new music, of new ways of recording.”

“747 is a snapshot of where we are as a band,” adds Kelley. “It’s us wanting to solidify our place — to stay at the top of our game, for lack of a better way of saying it. You know, when you start playing these arenas and these amphitheaters, and the fans are gravitating toward this music, it’s a drug. You want it. You want to stay there. As a band, we’re ready.”

TwitterAmazonMySpaceYouTubeOfficial WebsiteFacebook
*Service and handling fees are added to the price of each ticket.