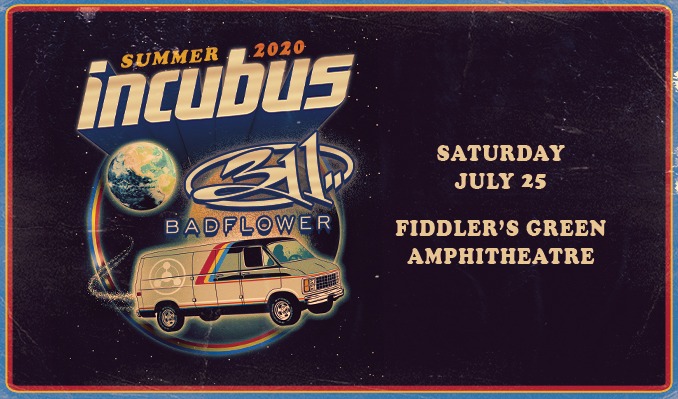 As life goes on, it moves in cycles. Within these rotations, each iteration presents its own distinct inspiration. Almost three decades together, Incubus steadily harness this ever-evolving energy and channel it into their music. Once more, the influential multiplatinum Los Angeles quintet—Brandon Boyd [vocals], Mike Einziger [guitar, piano, backing vocals], José Pasillas II [drums], Chris Kilmore [turntables, keyboards], and Ben Kenney [bass]—siphon a surge of unfettered creativity into their 2020 EP Trust Fall (Side B).

“We go through cycles where everybody feels reinvigorated and excited to try to break new ground and forge into novel territory,” exclaims Boyd. “When we wrote S.C.I.E.N.C.E. back in 1997, we were teenagers. We had a lot of piss and vinegar. We had a lot to prove. Six years later, when we started recording A Crow Left of the Murder, it was a reboot. We’d enlisted Ben to be a part of the band, and everybody was really excited about what we could do together. A lot of the excitement ultimately manifested itself in the record. The ethos carried over to certain points in our journey. This new grouping of music, Trust Fall (Side B), is similar in spirit.”

Capitalizing on such momentum throughout their career, Incubus have magnified the scope of alternative music with each and every subsequent album. Earning dozens of multiplatinum and platinum certifications worldwide, their sales-to-date exceeded 23 million albums by 2020, while streams surpassed 1 billion and counting. In 2017, their most recent full-length, 8, vaulted to #4 on the Billboard Top 200 as their fifth consecutive Top 5 entry on the chart. Between standout appearances everywhere from BottleRock and Shaky Knees to Eddie Vedder’s Ohana Festival, the boys launched a sold-out 20th anniversary tour in celebration of their triple-platinum classic, Make Yourself, in 2019. The latter proved to be a point of reflection.

“It put so many things in perspective for all of us,” he admits. “We hadn’t talked about the implications of the 30 years. You never expect or anticipate to make something that will resonate with a large group of people. There’s the hope and possibility it might, but it was wild to have the excitement echoed back to us every night. We were excited to enter into a new chapter.

The latest chapter earmarked a handful of firsts. They became independent for the first time since 1996, aligning with ADA Worldwide under a new deal. The guys also planted roots in the San Fernando Valley. They staked out their very own rehearsal room and studio where the bulk of Trust Fall (Side B) would be recorded with a little help from GRAMMY® Award-winning producer and frequent collaborator Brendan O’Brien [Pearl Jam, Red Hot Chili Peppers].

“For the first time, we have a space solely dedicated to writing,” he goes on. “It’s been amazing to have a spot where we can all get together, hangout, and rehearse. We write music as a necessity. I suppose there’s a calling which takes place. We get an overwhelming urge to get together and see what happens. These creative urges ebb and flow. Having a place to congregate allowed us to make room for those urges when they started to flow.”

Incubus heralded this body of work with “Into The Summer.” Beyond a show-stopping performance of the track on The Late Show with Stephen Colbert, it attracted praise from Billboard, Forbes, and more. Meanwhile, the single “Our Love” exemplifies their evolution. Percussive claps swell alongside an ethereal electric riff dipping in and out of a galactic bass bounce. The rush momentarily breaks on heavenly acoustic guitar as Boyd croons, “Is anybody ever really awake?” Under a vocal crescendo, one final frenetic rhythm doubles back around.

“Conceptually, there’s something pertaining to the love we share in our band and the love generated amongst us,” he goes on. “Even though it’s complicated, we hold this love together. As much as it’s about our weird little family, it’s potentially about something bigger than that like the love between two people or the love for self. As I get older, I’ve realized love is a very dynamic thing. The more space we allow for love’s dynamism, the more happy and fulfilled we can be. It begins with oneself though. If we let love be more dynamic and alive, we’ll be happier.”

Elsewhere on the EP, “Karma, Come Back” slips from creeping distortion towards an urgent vocal plea, “You’ve got to do better before this karma, karma, karma comes back.” Hinging on the distorted sway, it spirals out on one last cathartic fit of feedback.

“It occurred to me there are karmic implications with anything anyone sends out into the world,” he states. “There’s something to be said for not only looking at your adversary, but yourself in relation to that.”

Written in a little house in Venice, the confessional “Papercuts” bleeds truth between sparse piano and tambourine. “When we write in our diaries, we write as if we’re telling people the hardest things we need to say to them,” he explains. “Most of us never intend on the person we’re writing about to read them. Until, there’s a moment the person does. The song tells that story.”

Then there’s “On Without Me.” Recording drums and guitar on the road, Boyd put the finishing touches on the tune back in Los Angeles with O’Brien. It picked up a timeless thread from a different angle.

“I’ve written quite a lot of breakup songs without ever intending to,” he smiles. “There’s an emotional through-line where I’m morning the loss of love or inspired by finding new love. ‘On Without Me’ is a breakup song about breakup songs.”

In the end, Incubus ignite one of their most potentially impactful cycles yet.

“If you hear the music and want to dance to it or learn what the lyrics mean, that would be phenomenal,” he leaves off. “Or, maybe the lyrics switch on conversational modes for you to think about. Perhaps, you even just take a step back, enjoy life, and do something small to make the world a better place. After all of these years, this band is everything to me. I hope we’re possibly creating new memories that will be celebrated in another 30 years.” — Rick Florino, January 2020

Official WebsiteTwitterFacebookMySpaceMore Info
*Service and handling fees are added to the price of each ticket.